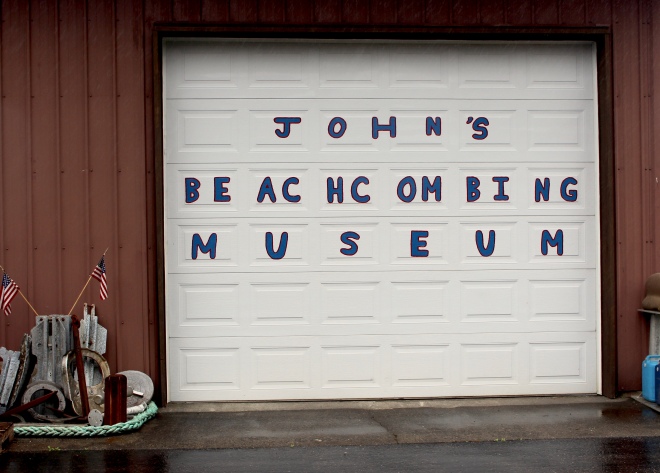 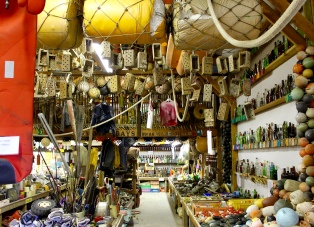 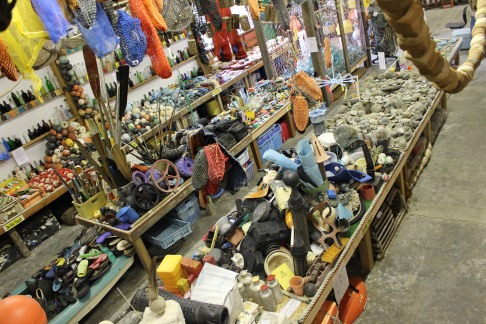 Description: A warehouse in a small clearing of houses surrounded by a dark, dense forest of lodgepole pine.

I am travelling with a friend in a rented grey Hyundai we have christened Jess. Having driven for three hours, we are enticed off the road by a totem pole of buoys higher then the warehouse roof. I wonder how the neighbours feel.

Although the hand-painted sign instructs us to call ahead, we swing in and park on the gravel. A large figure that is John looms into view on the left, warily inquiring about our business. Once curiosity is expressed and welcomed, we are led into the warehouse. A high-pitched bell announces our entrance to nobody except the ghost of the owners of at least one of every object ever lost at sea.

Finding John’s museum of beach-combed treasures is like finding the tooth fairy sitting on its lifetime pile of teeth or a shaded valley filled with the world’s half-burned paper lanterns. There is a sense that we have found an underside of something, an underwater lair which surfaces only at odd times of the day and year, that contains all the reminders of our living that we had regretfully or wishfully forgotten about.

The items on display range from natural to man-made, old to new, fantastical to mundane. Many could be categorised as items that were either offered to the sea or robbed by the sea. No matter what their material, story or use, they are made equal by the sea and by John’s drive to collect and assemble them in a white warehouse outside of Forks, Washington, population 3, 688.

John mainly beachcombs along the Pacific Northwest, although he has made trips down to Texas and Florida. The first thing to greet us was a wall of whisky bottles known to be favoured by the Japanese navy. The tradition is to throw overboard every bottle drank with still a drop of whisky in the bottom as a gift of thanks to the sea. John recounts the practice kept by a fellow beachcomber of gathering enough whisky bottles to have a decent drink by nearby rock pools after a hard day’s combing. 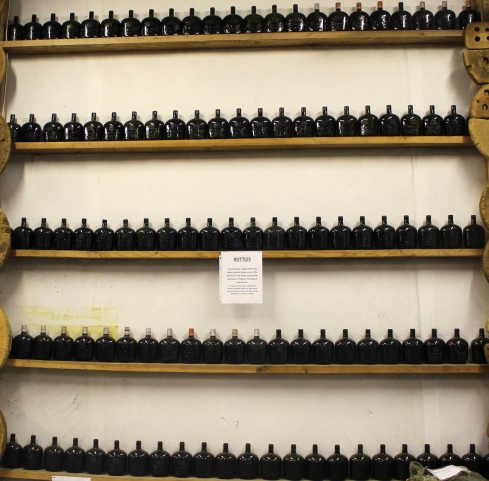 We are then struck by the number of buoys. Plastic buoys are by far the most common item found on beaches by John. Glass ones are more rare and therefor precious. 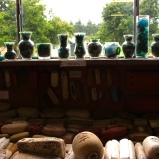 Sponge Floats and Shards of Glass. 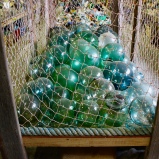 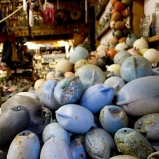 Glass Buoys or Floats are prized possessions of beachcombers because they are no longer being made. The first glass float  was invented by a man named Christopher Faye around 1840 near Bergen, Norway. They were used extensively by Korean and Japanese fishermen before being replaced by styrofoam or plastic from the 1960s onwards. There is a beautiful synergy to using glass as float material since if it is washed up, it will eventually return to the sand from which it was made, with a bit of soda ash and limestone thrown in. Not so for plastic or styrofoam, according to John.

Next, a large discovery is made: the story of spills. Raggedy Anns from the 1970s, Rubber Ducks from 1992, Lego from 1997,  Nike Shoes from 1990 and 1999. There is something eery about multiples of an item on display. The boatful of nike shoes or the table of severed Raggedy Ann heads calls to mind the vastness of the supply chain of the branded goods common on American shelves and the trade routes travelled by container ships, full when heading towards America, empty when returning to Asia. Who knew a museum of found flotsam would lead to such large thinking!

Beachcombers are constantly on the lookout for news reports of a container ship caught in a storm since some spills can be beneficial, even profitable. John shoed his whole family after the Nike spill of ’98. 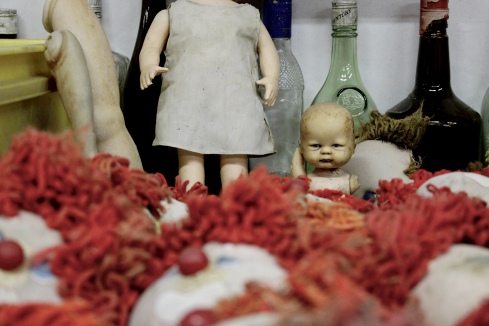 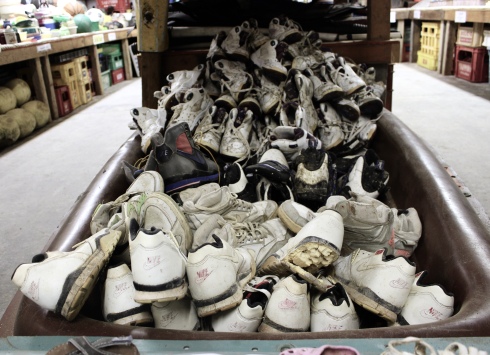 Then we find John’s cave of delicates. 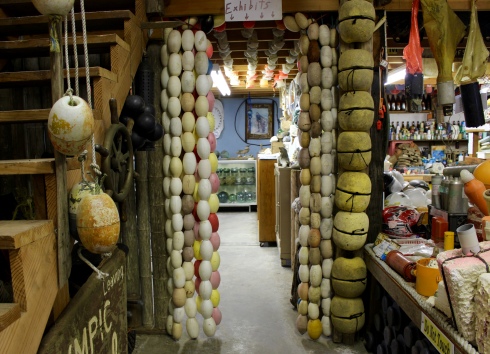 It house remains of human design and objects of our varied endeavours. How does the sea/ocean feel to have to carry our successes and failures for years in its slipstreams and whirlpools? 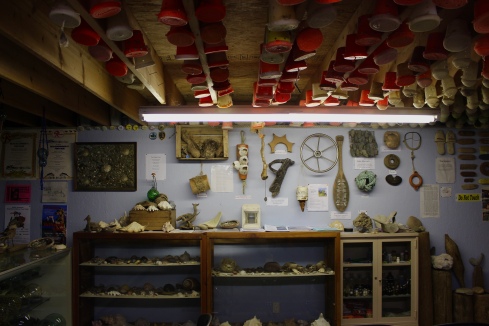 Red crab pots light a wall of shells and boat debris. Writers have given voice to the sea, seen in it loneliness, death and destruction, mystery and horizons of hope. Here we have temporary houses of marine animals and mariners hanging side by side. Which design is more durable?

The Best Kind of Communication.

One romantic and familiar literary plot trick is the message in a bottle. 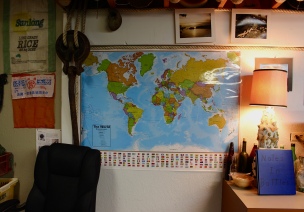 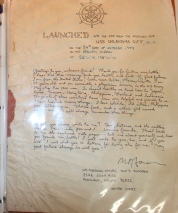 John owns a whole file of messages he has found in bottles and diligently replies to every message he finds.Many are from Japanese school children. It is definitely a beachcomber’s duty to do so. I imagine the surprise on a school kid’s face and the incredulity of their teacher upon receiving a letter from John in the post, a few months after slipping a bottled letter into the sea. Maybe the child is certain for a while that messages in a bottle are the most sensible form of communication and cannot understand why it is not used more often. I know if I was in the child’s place as a child myself I would imagine John as a sea god receiving the bottle through his salty post box. John is most likely a human name for Poseidon, my child’s mind reasons. I would wager that John the beachcomber and retired plumber lives on as a half-fish underwater King in the imagination of many, mostly Japanese, children.

As I flick through the file of letters protected in plastic pockets, one letter in particular interrupts my mermaid musings. It is from the ship’s surgeon of the USS Oklahoma City CG 5, bottled on the 24th of October, 1979 (see above righthand image). My own basic internet searchings have not revealed the current whereabouts of Dr. Marshall Hanson (who if alive today, would be in his 50s), but maybe he is still out there and would like some more replies.

When the Sea Robs.

As has become clear throughout this post, the pacific northwest and Japan have a close geographically relation. The seismic events of March 11, 2011 231 miles Northeast of Tokyo took the lives of 22,000 people but also took the possessions of their livelihood out into the middle ocean. Five years later, debris of the lives lived by the deceased is still arriving on the shores of North West America. Beachcombers are like mushroom hunters looking for morels in places of disturbed earth, finding their bounty in the remaining ripples of distant disasters.

This shrine is the last thing we look at before going on our way.

Keep Doing What You Are Doing, John.

As I said at the beginning of this post, the Beachcombing Museum is like an unexpected and brilliant underbelly of daily life.

Through the regular ritual of walking the place where water and land meet, John has collected a wide enough breadth of items to tell a broad and deep history of ourselves, from the daily to the disastrous. It is not all about us, of course. It is the sea, the most unfamiliar and unknown aspect of nature, that has facilitated this unsettling museum and it is the sea that has fed John’s consuming passion. I would say that it was one of the most affective “exhibitions” I have ever money to see (John charges ten dollars. Now that he is retired, he is making a living solely from the museum’s proceedings). Myself and my friend thank John for his creativity and tenacity.                   We leave John’s warehouse full of something similar to awe.

Only a selection of the amazing things housed in this Northwest warehhouse was described in this post. More pictures of stunning junk can be found on flikr, here.