Through the food you find the people.

This article is based on an interview that took place on the McNally family farm. Although written in the first person, the text is not verbatim. It has been reviewed and approved by the interviewee.

Sarah McNally has grown up to the rhythm of the seasons. Her parents are both farmers in North County Dublin. They first met at their local Macra na Feirme, a youth organisation for young Irish farmers founded in 1944.

The McNally Market farm found its feet by supplying local fruit and vegetable shops in the early eighties. However, the amount of fresh produce returns for supposed aesthetic reasons eventually led the family to sell directly to the public, removing the middle man. In 1997 the McNallys became stallholders in the then young Temple Bar Food Market. Their green canopy has since become a cornerstone of the weekly market.

Sarah has gone from weeding, climbing and falling from trees, sucking on fresh swede to kill a thirst, hunting hidden eggs and sitting under market stalls to setting up her own independent food business. Along with Liadain Kaminski, Sarah runs The Market Kitchen, a cookhouse that translates the wide range of Temple Bar Market foodstuffs into belly fillers and table chatter. I met up with her in the McNally farm shop in Ring Commons, Balbriggan, to discover a part of her story.

How did growing up on a market vegetable farm affect your idea of food?

A farm childhood is all play, from the weeding to the egg hunting. We spent years in the fields, always outdoors .

The farm has never used man-made chemicals. Mainly this was because my mum did not want to spray where kids were playing. Our customers then asked for us to apply for the “Organic” label. McNally Farm is organic but not in an evangelical way.

In 2013 I undertook a 6 week stage in River Cottage Restaurant.It was not until I went to England that I began to understand the value in our work. Ironically, considering the inherent healthiness of River Cottage cooking, it was the first time I put on weight. Living on a tight budget, in between shifts I would feed myself from Tesco. Because all the vegetables tasted collectively like nothing, I ended up surviving on potatoes and butter. The tastelessness of the supermarket vegetables combined with my positive experience of River Cottage itself and its seasonal ethos helped to cement how I felt about food, and about the farm. Behind the food is a person, a grower, a breeder, and we cannot afford to put price over quality. Our living comes from the land. 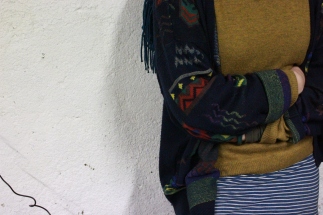 Is farming a contemporary career choice? Could it be in the future?

I decided when I was young that I would not be a farmer. You have to love farming to be able to do it every day. I do see myself living in the country, probably here [Ring Commons] or nearby.

We have recently opened a farm shop which provides evidence of the farm, in a sense. It is helpful when our customers can see the production reality behind the produce and understand things like the “Hunger Gap”, a between-season period from March to May when everything is green, and the fact that sometimes our beets are large and sometimes they are small but either way they are delicious.

Farming is hard work but that is not something to be afraid of. It is unrealistic for one person to be able to grow enough to feed themselves year round while working another job but maybe as food awareness and consciousness rise, as seems to be happening, there will be more incentive for others to set up and commit to farms like ours.

What does the market mean to you?

Olive Oil from a neighbouring trader.

Sometimes you receive comments such as “you have great produce, have you ever thought of selling to (enter well-known retailer)?” This suggests that market selling and growing is only a step in a certain direction, a temporary reality. But we chose the market and we are happy in what we are doing. A market is different to a supermarket. A community forms naturally in the early morning line at the stand. People are comparing cooking techniques, discussing a new or unfamiliar vegetable or anticipating the next crop of flower sprouts or choy sum.

We are busiest at 9am. All nationalities, especially those with a strong market culture, get up early to do their weekly shop. Generally, people who shop in the market come for the freshness, the quality and the craic.

Market Kitchen has emerged directly from this food hub of many passionate producers. At the moment our menu consists of soups, sandwiches and an egg dish. Where we are going is being explored. I recently made a dish of alexander greens I realised had been growing in our garden for years. It is hard to predict what will inspire or taste good week by week.

Sometimes I wonder what my life would have been like if I was not a farm kid. Would I have come out every Saturday to the market anyway? Would I love leek as much?

Can you share a food culture or place that has inspired you.

Norway. What they have, they use. Cod roe, cod skin, cod tongue.

Temple Bar Food Market and Market Kitchen are on